The History of the Organisation

The sport of competitive target pistol shooting in Australia was introduced on an organised and formal basis in Tasmania in 1928, followed by South Australia and progressively thereafter by all the other Australian States and Territories.

The requirements of the International Olympic Committee (IOC) saw the introduction in 1956 of the Australian Shooting Association as the national shooting association to enable the Australian Olympic Federation (AOF) to field a shooting team in the Melbourne Olympic Games held in that year.

As the body covering pistol, the ‘Amateur Pistol Shooting Union of Australia’ (APSUA) was Inaugurated on 16 June 1956 and affiliated to ASA as the body representing pistol events. The foundation of our national pistol association came through the joint efforts of George Rogers of Victoria, Bob Morgan of Tasmania and Fred Bott of South Australia who worked tirelessly overcoming many difficulties of that time to achieve this objective.

PA currently has approximately 15,000 members in its State and Territory Associations, is a non-profit organisation and does not receive funding from the Federal Government.

PA is administered within the confines of its Constitution and Regulations, which provide for a Management team of five officers (President, 1st Vice President, 2nd Vice President, Treasurer and the Secretary), who are assigned the responsibility of overseeing the day-to-day running of the organisation. The Sports Administrator also forms part of PA Management. The PA Constitution also provides for eight (8) Executive Officers, one from each State and Territory and together with Management form the Executive Committee. 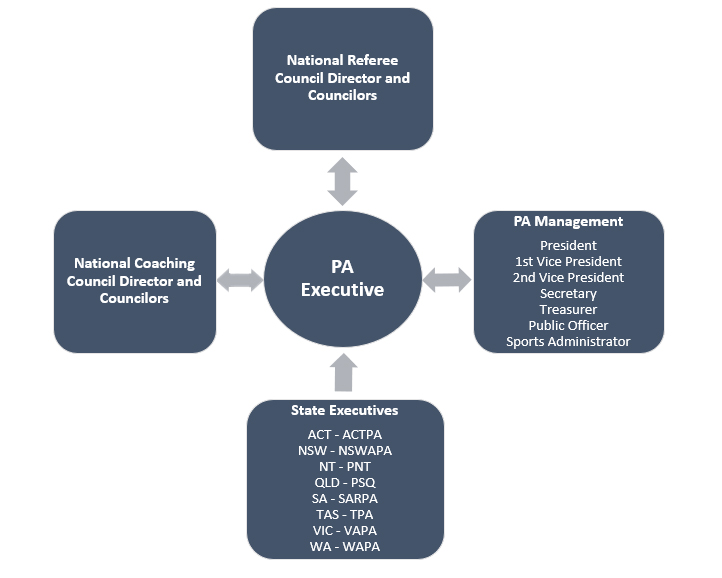 Not only does the Executive Committee act for the benefit of PA and its members at times of decision making, but it is also the responsibility of State Executive Officers to communicate such decisions to their respective State Affiliates to ensure that PA members are informed of current issues at all times.

PA operates within a three-tiered system with each tier maintaining a specific and important role within that structure.

1. Starting at the grass roots, the first level consists of all the individual clubs around Australia who maintain the member base of the organisation. In order to take up the sport of target pistol shooting an individual joins a club and thus becomes part of a close knit community that share a common enthusiasm and enjoyment of the sport. It is the responsibility of the Clubs to communicate with their members and with their respective State/Territory Affiliates who form the next level within the PA structure.

2. The State/Territory affiliates are directly responsible for all activities on their State/Territory level. The affiliates share a dual responsibility with the clubs in keeping open clear lines of communication about State as well as National issues. If, as an individual PA member, you have any queries with regard to PA activities your first point of contact is your Club Secretary and thereafter the State Secretary or Administration Officer.

3. At the National level, PA is responsible for: