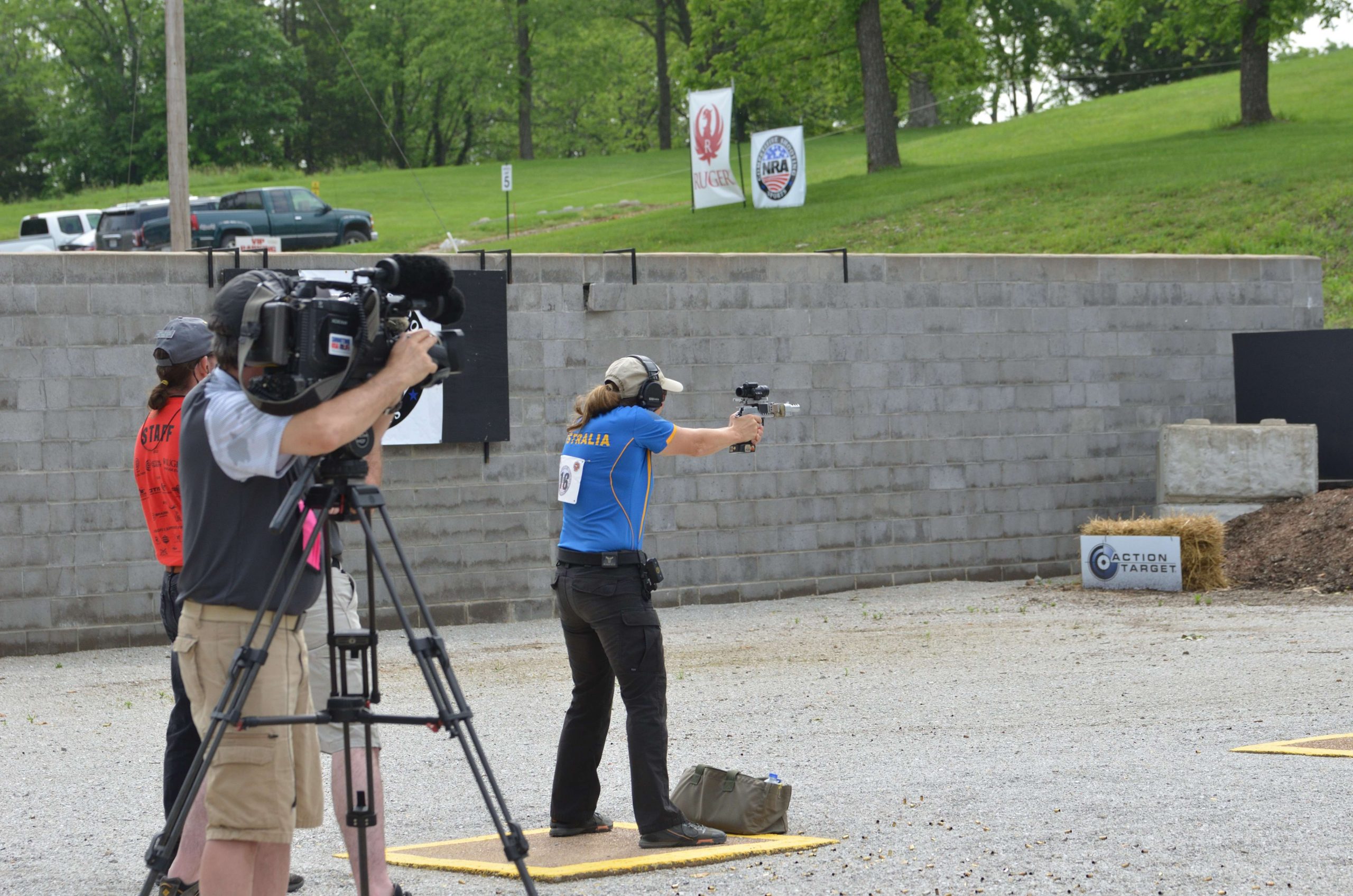 Two types of targets are used in Australia i.e. 8 inch steel falling plates and the NRA target, which is a cardboard rectangle with a rounded top. The target has a printed inner X 10 ring used for tie breaks, an outer 10 ring and an 8 ring. The remainder of the target scores 5 points.

Action Pistol is available to all pistol shooters who hold a PA holster proficiency card.

The Falling Plate event is a series of six 8 inch plates, each worth 10 points and one X. The plates are shot at 10, 15, 20 & 25 yards with the time allowed to shoot all plates varying from 6 to 9 seconds. Competitors may stand, kneel or go prone to shoot the plates, but the starting position is always to stand with hands shoulder high. The plates are a hit or miss match. The saying is “there are no 8’s on plates” as they can make or break your match.

The Practical Event consists of 4 stages, each stage having 3 strings and 12 shots – a total 48 rounds. Each stage is shot at 10, 15, 25 and 50 yards. At the 10 yard line one of the strings require the competitor to shoot 3 shots on each target using only his/her weak hand i.e. left hand if right-handed or right hand if left-handed. The competitor has between 3 to 15 seconds to complete some of the strings depending on the distance.

In the Barricade Event the competitor stands in a box behind a solid barricade. The course of fire is 6 shoots from one side of the barricade at one target and then 6 shots from the opposite side. This is shot from 10, 15, 25 and 35 yards. All strings are 6 shots and times range from 5 to 8 seconds.

These four events combine to give a match aggregate. The Australian record is 1920 183x shot by Mickey Fowler of the USA at the 2000 National Championships in Canberra.

The competitor does not need a lot of specialised, high price equipment to compete. The important thing is that the pistol is reliable and safe. A safe holster is paramount and competitors using semi-automatic pistols will need extra magazines. In the Open class event the competitor can use red dot scopes, extended bases for going prone, wings for the barricade and adjustable mounts for the mover. However, with the introduction of Standard class, competitors can shoot with an out of the box semi-automatic pistol or revolver.

There are some specific rules for the type of ammunition used in Action Pistol competition. The lower limit of calibre shall be 9mm. Samples of ammunition will be collected in a tournament and tested over a chronograph to meet or exceed the power factor. Power factor is calculated at bullet weight x muzzle velocity = not less than 120,000.

Many pistol clubs in Australia have modified their ranges to meet the requirements of Action Pistol and many State Associations now conduct one day Super Sunday matches, which is a low cost, great day of competition shooting. The National titles are held around October each year.